Bayhawks at the 2020 Disney Showcase, Florida 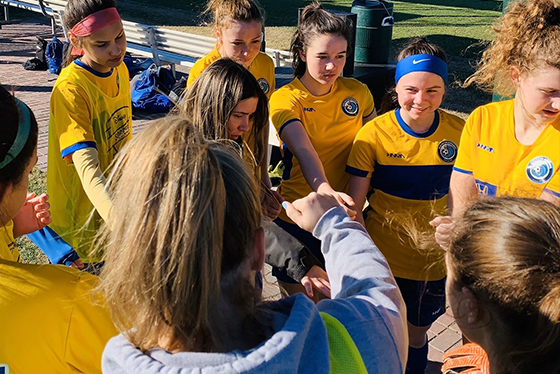 The Burlington Bayhawks OPDL U17 girls team consisting of players born 2003, 2004, and one 2005, traveled for their first international showcase at the 2020 Disney Showcase in Florida. After a strong showing at the FC Durham Showcase before Christmas, they record the highest possession stats across all competing teams.

After some initial nerves, the group settled into their environment and performed admirably over the weekend, winning one, tying one, and losing the other. They adapted well to the direct style of their opponents as the weekend progressed and grew more comfortable with their game play. It was a great opportunity for the group to bond and get to know each other better as they stayed at the same resort.

The team’s next showcase will be the prestigious Jefferson Cup in Virginia in March, going in as the highest placed Canadian team attending. They have also been visited by two D1 college coaches (from Hartford and Dayton University respectively) in recent weeks, who observed their practices in the hopes of identifying future recruits. University of Toronto has also recently invited them for an exhibition game in February due to the compatible, possession based style of play.

It is sure to be an exciting 2020 for this team, who will also travel to Dallas in April to compete in the World renowned Dallas Cup. The links and connections formed by the team and High Performance Manager, Jordan Brown, will be set in place to filter through the High Performance Program and be in place for generations to come.