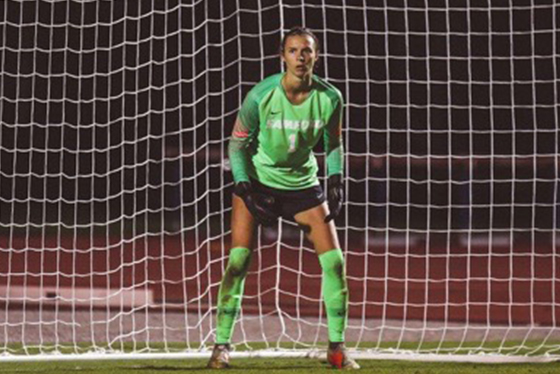 Bayhawks Alumni, Morgan McAslan, had great success at Samford University in Birmingham, Alabama. Morgan spent 5 years goalkeeping with the Bayhawks under coach Casey Downey and continued on to earn amazing achievements and set impressive records in her sophomore year.

Playing for the Samford Bulldogs, while majoring in Education, Morgan had a fantastic season starting in goal for all 22 games and playing in almost 2000 minutes. She was named First Team All Conference, First Team All Tournament, and the Southern Conference (SOCON) Tournament Most Outstanding Player, as well as the October 2019 Player of the Month. With a season high, tying the Samford record of 12 saves against Auburn, she posted a 0.87 goals against average and a total of 12 shutouts.

The team finished the year with an impressive 13-4-5 record and were the SOCON League Champions and SOCON Tournament Champions. With this playoff tournament win, the Bulldogs received an automatic bid to the NCAA D1 Women’s Soccer Championship and unfortunately fell to the SEC Champions and 5th national ranked team, the Carolina Gamecocks.

An impressive season to remember. Congratulations to Morgan McAslan for all of your hard work and amazing accomplishments as a Bayhawks Alumni! #WeAreBayhawks