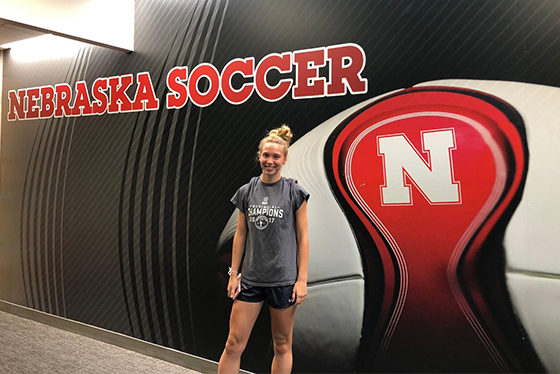 Aislinn Boyle has been playing with Burlington Soccer Club for many years and has just recently received a scholarship from the University of Nebraska! We are so proud of her achievements and would like to take this opportunity to showcase her career in this article!

Aislinn initially started playing soccer in Niagara Falls when she was only 4 years old along with other sports. When she was 8, she started playing with Burlington Soccer Club and has played here ever since. When asked about growing up with the Club, Aislinn stated: “The Club is filled with amazing coaches that have helped me tremendously over the years. Especially Casey and Dino.”

Aislinn has already celebrated many accomplishments in her soccer career. She won the Ontario Cup in 2018, and then was awarded bronze in the National Tournament. Her high school team, Dr. Frank J Hayden, won a silver medal in OFSAA in 2018 as well. Recently, Aislinn’s team won the U21 Provincial Elite League and are looking forward to winning another Ontario Cup National Title!

When asked about her goals, Aislinn revealed that ever since she was young, she wanted to play Division 1 Soccer in the United States. For the future, Aislinn also strives to make an impact on the team she is playing for. Aislinn states: “I can’t imagine a better situation than playing the sport I love at a high level while getting a great degree to set me up for the rest of my life.”

When asked what advice she would give others, Aislinn expressed that she would like other players to “never stop believing in themselves! I know it sounds cliché but it’s true! There was a lot of ups and downs for me in this process, but one thing I never doubted was my ability to achieve my goals so I would encourage others to do the same.”

We are so happy that Aislinn has enjoyed her time at Burlington Soccer Club, and we wish her the best success!