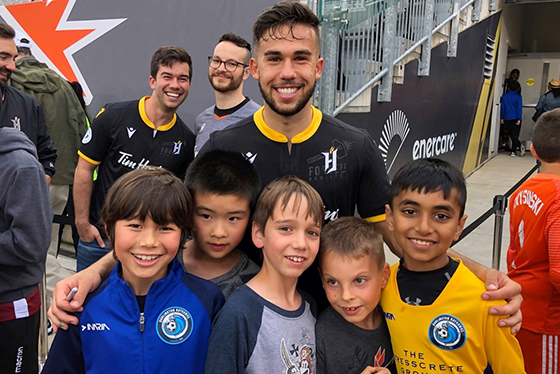 Burlington alumni, Jace Kotsopoulos, continues on his path of soccer success to make it to the Canadian Premier League as a striker for Hamilton Forge FC. Playing for the Burlington Bayhawks, the University of Guelph followed by Hamilton Forge FC, Jace is a great example for what hard work and determination can get you!

Jace Kotsopoulos is a Burlington Soccer Club alumni who currently plays as a striker for Forge FC in the Canadian Premier League. Jace played competitively for Burlington Bayhawks for several years until 2015. At this time, he went to the University at Guelph to pursue and education while playing for the University soccer team until the end of the 2018 season. During his 2018 campaign, Jace scored 15 goals to become Guelph’s top scorer.

Jace started playing for Forge FC in 2019, the inaugural year of Forge FC and the Canadian Premier League. More recently, he forced his way into first-team contention, scoring 2 goals in his first 4 appearances. After one of his Forge FC matches, he met with some current Bayhawks on the field, signed autographs and called everyone together to take a group Bayhawk photo (pictured above)!