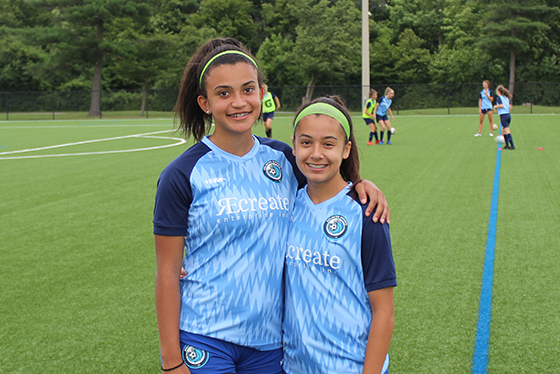 Congratulations to Destiny Pfeiffer (left) and Emma Oliphant (right) from our U17 Girls OPDL who have been selected to travel to Scotland and train with the Glasgow Celtic’s Women’s team from July 22, 2019 to July 27, 2019.

Destiny and Emma both play for our U17 Girls OPDL team and both have been with the team for several years building a great connection between the two of them along with the rest of the team. Emma is the current Captain of the Under 17 Girls OPDL team and plays as a central attacking midfielder. She is currently attending Notre Dame High School and plays for their field hockey and soccer teams. Playing for Notre Dame, Emma was part of the OFSAA winning team in 2019 and scored the game-winning goal in the final.

Destiny plays as a right-sided centre back for the Girls Under 17 OPDL team. Destiny is from Kitchener and has been playing for Burlington for a number of years. She first became interested in soccer due to her parent’s love for sports and with her mother as a role model playing soccer for Georgia Southern University and a Canadian National team. Both parents have been a very big influence on Destiny’s soccer career. Destiny has played a wide variety of sports, but prefers soccer and track, which she still competes in for her High School.

To find out more about Destiny and Emma, check out the video interview!